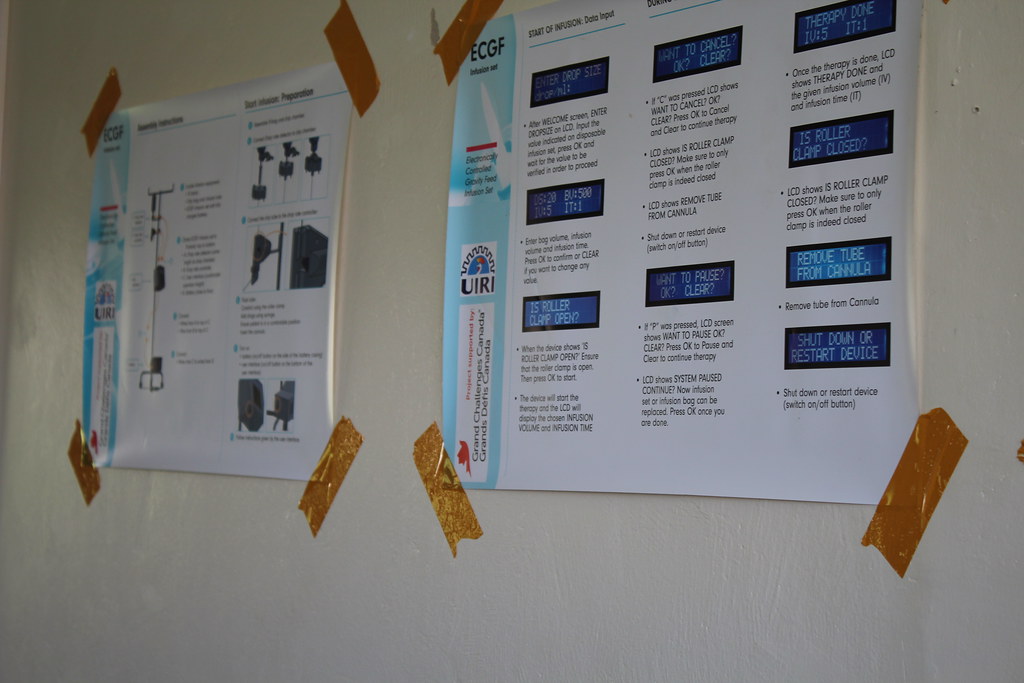 The process of administering intravenous fluids and medication during infusion therapy in young children requires careful monitoring to prevent adverse outcomes via fluid overload or under-infusion.

The current standard of care in most Sub-Saharan African hospitals relies on manual regulation of intravenous fluids, leaving the infusion process highly prone to human error. This challenge is further compounded due to the clinician work burden characterized by high patient to staff ratios which make it difficult to monitor each child continuously.

The project refined the Electronically Controlled Gravity Feed (ECGF) Infusion Set to improve its flow rate accuracy and subsequently assess the device’s safety and performance during infusion therapy in Uganda.

5 prototypes of the ECGF were produced, pre-clinically tested, and used to conduct clinical trials. The aim was to achieve a flow rate accuracy of below +/- 10%. Clinicians were first trained to install and operate the ECGF device. The study observed and compared the time required for clinicians to regulate and monitor fluids versus the fully automated process using the ECGF device.

During the course of the project 79 nurses, doctors and biomedical technicians from 3 health facilities were trained on the ECGF device. Data was collected on the challenges faced during infusion therapy and initial perceptions the: ease of set up, usability, functionality, safety and ergonomics of the device.

In the first human pilot of 12 adults, the device achieved a flow rate accuracy of +/- 7%, which is the percentage error margin between the prescribed and actual dosages. Patients had their blood pressure, pulse rate, and respiratory rate monitored for 48 hours after treatment. All patients were stable with no unanticipated adverse device effect reported.

A clinical safety pilot in children aged 5-8 found that the most notable improvements were in children suffering from malaria, pneumonia, severe diarrhea and dehydration.

Clinical trials for children up to 4 years of age were completed in early February 2019. Analysis of the data from this trial is currently being finalized.

The next critical steps for the project are to: